i love the xkcd reference

I'm hoping that this game will get an update. Played and "beat" it several times and really liked it.

Nice idea, unfortunately it's teaching the wrong way to think about password security.. For those actually interested, google Diceware 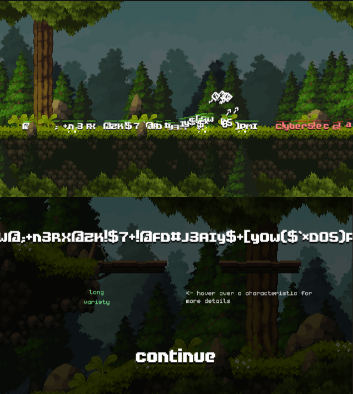 hehehe you really are foolish

This game was really fun. The interesting game concept drew me in, and I got kinda addicted. It was also fun learning about different aspects of password strength, but something I felt was wrong was the background of the levels. I was expecting a grid and kinda tech-ish background so seeing a forest was surprising. But overall, I really loved the game.

tip have a lot of symbol symbols = fireball

Ended up with 42 charcters XD

How to get it on Windows 7?

wow this was almost a year ago and i just saw this. happy new year

managed to bug game by dying and winning at same time

This was a really great and fun game. The way it shows different password strengths and how to make a password stronger through various techniques was innovative and interesting! I also liked the little blurbs that gave information about the passwords being fought. If this game ever gets expanded upon, I do think an interesting piece of information to be added is the fact that even if someone has a strong password, if they use it on multiple sites, it might as well be useless due to leaks and such.

I'm glad you liked it! Great point, there are many more important aspects to cybersecurity than just raw password strength 💪

I enjoyed this game very much.

how did people get such short passwords to win? i won at S@Owd/#QO3sc2tro!$ppfb_

This was alot of fun! grinded out a longer password to slaughter the final enemy!

Reply
designs up1 year ago(+1)

I'd love to see an addition so that how easy to remember a password is had an effect on its stats.

you know what happened, I won but the last enemy attack hit me and kill me but I still won thought

I had an alarming amount of fun with this one. It’s just simple combat fun done in a nifty way. I’m impressed with how well you managed to portray password strength via the medium of silly video game combat. The difficulty level seems to go up consistently with the strength of each password you fight, too, and I’m absolutely stunned at how well you managed to math that out. There’s even a strategy element where you have to decide if you want weaker characters at the front to let your ranged characters harass the enemy or put the explosive-throwing characters up front to weaken the enemy forces.

One little niggle, it seems like the passwords work really hard to stay in formation, and that lead me to some problems where I would direct my password to go to the right and the first letter would end up hanging too far to the left to aggro and attack the enemy while I was waiting for the later letters and the ones with ranged attacks to catch up. Had some frustrating moments with that.

I feel like the ability to fight against custom passwords wouldn’t go amiss either. That way you can get people to enter their real-life passwords and the game can show where they’re weak and then duke it out with the procedurally-generated password you get from playing the game. Maybe people can even compete to see who can find the strongest passwords.

this was a really good game :)

it says: An embedded page at v6p9d9t4.ssl.hwcdn.net says Your browser does not support WebGL

Please try another browser! I would reccomend using Google Chrome

i am using a Google Chrome browser :(

oop- I'd reccomend to try other browsers but other than that i can't help u fam sry :')

edit: it works now for some reason

Very fun and engaging! I ended up accidentally learning something too! :D

My first shuffle and the beginning of my password was dpr5sin